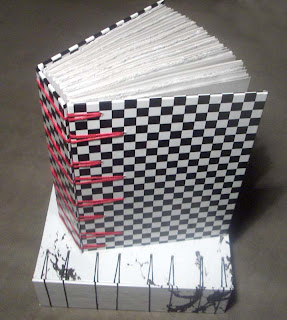 A few years ago, I posted on my blog a list of historical bindings that I wanted to revisit. One of the bindings on that list was the Secret Belgian Binding. The history of this binding was obscure and, other than it being somehow Belgian in origin, nobody seemed too sure about it. As it turns out, it's not even an historic binding!

Hedi Kyle and Emily Martin were both at PBI last month, and they have been the unofficial experts on this binding. So, as I'm sitting across the lunch table from these two, I made some mention of the Secret Belgian Binding. I don't remember my question, and it doesn't matter, because the two of them became excited about telling me the important news: they found the person who invented this binding! Anne Goy invented the Secret Belgian Binding - and she does indeed, live in Belgium.